"When the Christian community functions according to the priorities and protocols of previous generations, there is little resonance in the minds and hearts of today's twentysomethings."

We've been exploring a new book on the decline of church participation among young adults: "You Lost Me: Why Young Christians are Leaving the Church," by David Kinnaman, president of the Barna Research Group. 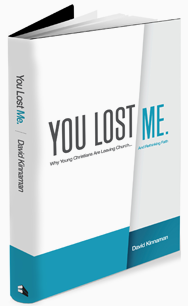 Chapters 3 & 4 look at three groups of young adults who have left church involvement.


Nomads continue to identify themselves as Christians, but believe personal involvement in a Christian community is optional. Generally, the importance of faith has faded, many are spiritual experimentalists, and most are not angry or hostile toward Christianity. They tend more to be frustrated or disillusioned.

Prodigals refer to those who have left their childhood faith entirely. Kinnaman divides these into "head-driven prodigals," who have found Christianity to be intellectually untenable, and "heart-driven prodigals," who express their rejection of childhood Christianity in "emotionally strong terms and may feel bitterness or resentment for many years after leaving the fold."
The study found nomads to be four times more common than prodigals. This is an opportunity for mission. Most young adults are not putting their faith on the shelf during their twenties; they are pressing pause on church.

Exiles form the third group, those who feel stuck between two worlds, pushed out and pushed away from something familiar.
Kinnaman closes ch. 4 with these thoughts:


"The challenge for the Christian community is how to respond to the growing number of exiles. Will we do what we can to equip them to make the choices that faced Daniel in Babylon - choice about balancing cultural accommodation and faithful, Christ-centered living? Will we listen to and take to heart their prophetic critique of the church's posture toward our increasingly pluralistic society? Will we change our structures, guided by the unchanging truths of Scripture, to nurture their gifts and unique calling into a world deeply loved by, yet in many ways hostile to, God?"


How about you?  What might be examples of "priorities and protocols" in the church that aren't resonating with young adults?
Posted by Unknown at 1:16 PM